The Stages of Group Formation, and how they Aid Your Teams Success

The formation of teams can be a daunting process for both you, and your employees. It is unpredictable, unreliable and a big risk for any company to take. You will ask yourself many questions, will the team succeed? Will the people ‘click’? Do I have the right people to do the task well? Will they make it?, or _will the fall at the first hurdle?

In 1965, Bruce Tuckman proposed five stages of team development: Forming, Storming, Norming, Performing and Adjourning. This model describes five stages that every team goes through during its development. By understanding this model, it can help take away the unpredictability of forming teams and allow you, and your team, a better chance at team success.

This is the first stage of a team coming together; a group of people have come together to accomplish a shared purpose and the results can be unpredictable. At the beginning, anxiety is high, people are uncertain and they are overly polite and pleasant. This stage can last a while as people get to know each other and the teams success at this stage depends on their familiarity with each others work styles, their experience with prior teams and clarity of assigned tasks.

As the team leader, you should:

This is the hardest stage in the development of any team, and undoubtedly your team will be at its least effective here. This stage is marked by conflict and competition as personalities and working styles begin to evolve and the members of the team are unfamiliar on how to communicate with each other. Teams may also disagree on goals and subgroups or cliques may form. Many teams often fail at this stage so it is important to reduce and address this conflict so that problems do not occur later on.

As the leader, you should: 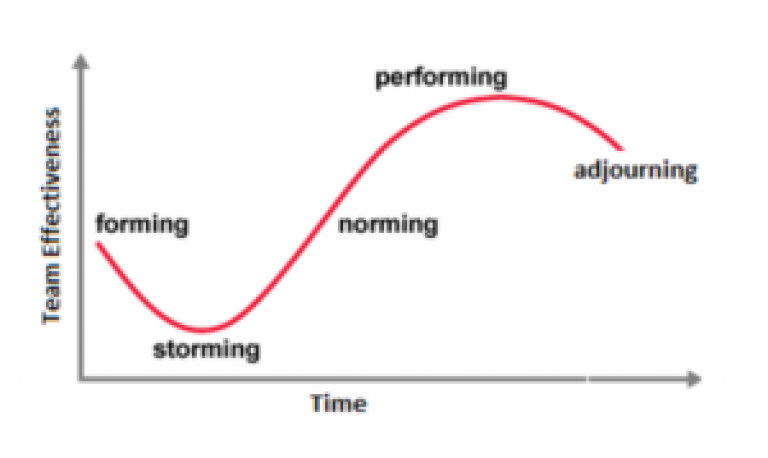 The effectiveness of the team at each stage

The team will begin to resolve their interpersonal differences, appreciate others and form working relationships. There is a sense of cohesion and unity and this allows for the team to work functionally together towards the end goal. At this point, performance increase as the team begins to cooperate and focus on the goals.

As the leader, you should:

At this point, relationships are formed and there is a clear and stable structure. The team is mature, organised and has a sense of consensus and cooperation. Problems and conflict, of course, do still arise, but they are dealt with effectively. The prime focus of the team is on problem solving and meeting goals; effectiveness is at its peak.

As the leader, you should: *Delegate work evenly and fairly *Focus on the development of individual team members *Allow people to join, or leave, as it won’t affect group performance.

This is the point where the project comes to an end and the team separates and goes their separate ways. Some team members may find this hard because they liked the routine of the group, have made close friendships or if the future, after leaving this team, looks bleak and unpromising.

As a leader, you should: *Allow for celebration *Recognise and reward *Allow for reflection: what went right? What went wrong? *Give guidance and support about future plans

Another tip for group success: Belbin and Tuckman 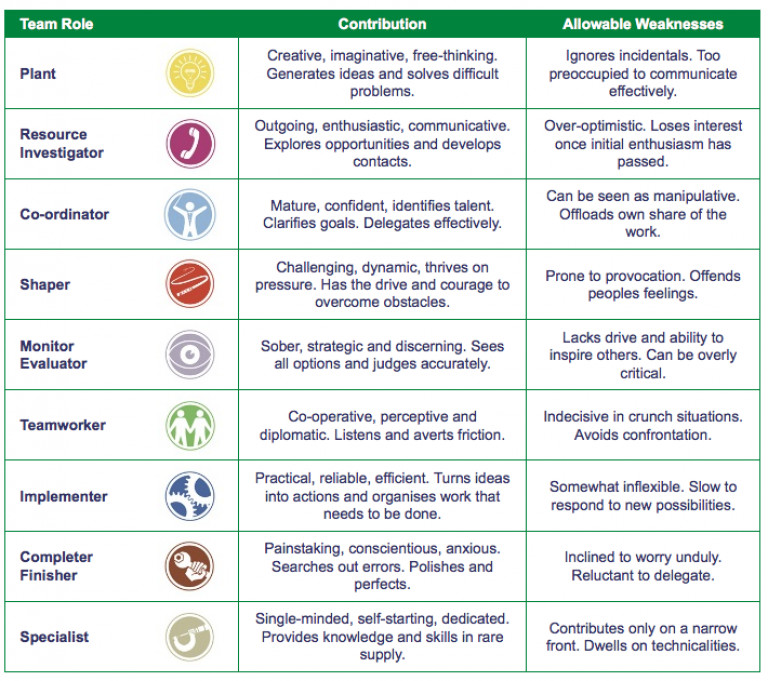 In the first three stages of Tuckman’s five stages of group development model, the roles you use from Belbin’s Team Role Inventory could make a massive difference to that teams success and effectiveness.

In the first stage, storming, it is good to have co-ordinators to bring the group together and create a sense of cohesiveness. If this team was comprised of too many plants in its storming stages, these people could be completing for their idea to be heard. A plants ideas and energy may decrease quickly if there are too many monitor evaluators as these people will motivate the plants by constantly pointing out the flaws in their ideas.

In the first two stages of Tuckman’s model (storming and forming), shapers are a good addition to the team because they provide a good balance and ensure that discussion are turned into results. However, shapers should be applied with caution as they may become too competitive and this could lead to them becoming aggressive and confrontational; which needs to be addressed or bad relationships will form. These bad relationships will cause problems and affect the groups performance later on.

In the second stage, there is also a need for plants to come up with new ideas and for monitor evaluators to analyse those ideas. Teamworkers are also a good addition to the team as they can help build constructive working relationships at this point

In the in the third stage, norming, co-ordinators are still needed to facilitate the groups decisions. The addition of some implementers to the team is also a good idea to make plans for progress and team development. Finally, a resource investigators is needed to go outside of team and look at competition.

After these first three phases, Belbin would argue that the team needs a balance of all nine team roles to become successful and effective!